Beeke in bad company - and taking good men with him!!
by Rev. Ivan Foster

The church website contains quite a bit of information about itself. For instance, under one link it tells us “What hap­pens during the church service?” “Each week is different, but some common elements include the following: Uplifting worship by a great band.”

Bell Creek Community Church is firmly in the “contemporary worship” camp! Clanging cymbals and raucous guitars are all the rage there. 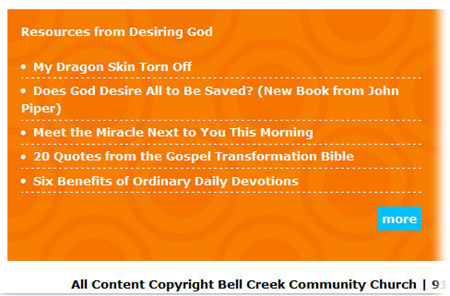 “Desiring God” is the website of John Piper. Bell Creek Com­munity Church is clearly in the “New Calvinist” camp!

Piper has been repudiated by fundamentalists of the old school because of his music and his associations with men whose theology is questionable.

Joel Beeke places himself in the Piper camp when he preaches at a church which openly associates with and pro­motes John Piper’s teaching.

It is not so very long ago that Dr Beeke indicated to some ministers of the Free Presbyterian Church of North America, when challenged by them about his associations with Piper, that he basically repudiated Piper’s ministry and yet he is happy to promote his books through his Reformation Heritage Books’ site and likewise promotes Piper and becomes associated with his ministry by preaching at Bell Creek Community Church. 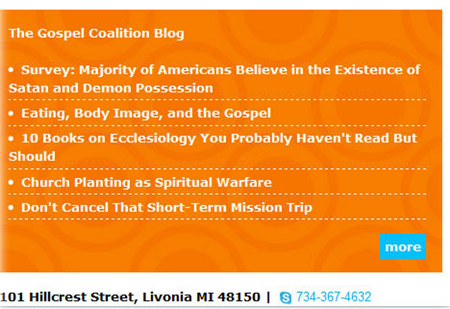 This coalition is very much a mixed bag!! Amongst its Council members are many signatories of the Manhattan Dec­laration, a thoroughly ecumenical socio/religious document which prominent members of the Roman Catholic Church and other theological vagabonds have signed, as a perusal of the list of signatories will soon reveal.

The document quotes ‘Mother’ Teresa, Pope John Paul II and Lyndon B Johnson as authorities on the issues it promotes. (Click here to read the Manhattan Declaration)

It just depends upon whom he is speaking to as to which way he is facing!

Visit to England by Dr Beeke 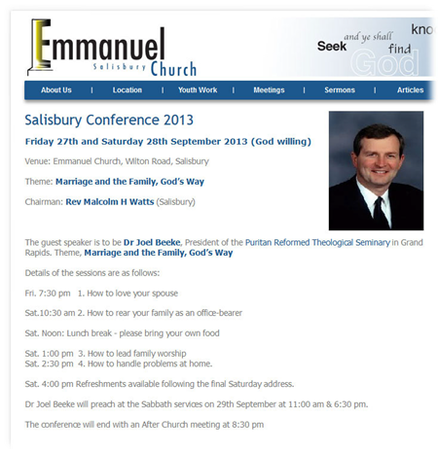 How Dr. Beeke’s meetings were announced on the Emmanuel Church website.
In September of this year, Dr Beeke visited England for a confer­ence in Emmanuel Church, Salisbury, where the minister is Mr Mal­colm Watts. He spoke at a number of meetings there on 27th and 28th September.

However, before the meeting in Emmanuel on 27th, he spoke at an Elim Pentecostal church in the afternoon.

Again, we have Dr Beeke associating himself with the unscriptural music of the modern “contemporary church” scene with its “wor­ship band” as well as endorsing the theological errors of modern Pentecostalism.

On the Elim Christian Centre’s website we are told the following concerning its ministry:

“THE MINISTRY: We believe in the ministries that Christ has set in His Church, namely, apostles, prophets, evangelists, pastors and teachers and in the present operation of the manifold Gifts of the Holy Spirit according to the New Testament.”

An announcement taken from the Facebook site of Elim Christian Centre, Salisbury.
The website also lists a woman as its Assistant Pastor.

Mr Hamlet Peter is listed as its “Worship Pastor/Elder” and says of himself that he is “in charge of the worship and sound ministry at Elim. I have a heart for worship and have a pas­sion for God and His Church. I also play in a secular band called Tramps & Amps.”

The Elim Church in Salisbury is openly in the ecumenical camp for it promotes the “Alpha Course” which is heavily endorsed by the Roman Catholic Church. Furthermore, the Elim church in England is listed as being a member of the “Churches Together in England” organisation.

This is the body which replaced the “British Council of Church­es” in 1990 and which coordinates ecumenical events and happenings in England.

Therefore, this engagement by Dr Beeke at the Elim Christian Centre in Salisbury seems completely incompatible with his speaking, but some 4 hours later, at Mr Malcolm Watts’ church conference.

A bold and timely warning by Mr Malcolm Watts

Mr Watts, in an article entitled, “The Crumbling of Evangelicalism”, set forth his views on Pentecostalism and the Charismatic Movement and the harm they had done to the cause of God’s Truth very clearly.

The article begins with these words:
Mr Watts then lists three movements he deems responsible for the attacks on Biblical doctrine which have resulted in the undermining of the cause of Truth - 1. The Ecumenical Movement. 2. The Charismatic Move­ment. 3. The Neo-Evangelical Movement.

When writing against the Charismatic Movement, Mr Watts says:
Mr Watts calls the Charismatic Movement “a modern variant of Pentecostalism” and of course it is just that. Charismatics hold the same basic doctrines on the Holy Spirit as do Pentecostalists. The many condemna­tions he lists in his article against Charismaticism can, with equal justification, be levelled against the Elim Pentecostal church at which Dr Beeke spoke just before his speaking at the conference services in Mr Watts’ church. That church is in the the ecumenical camp by its links with “The Alpha Course” and its involve­ment with the Roman Catholic Church.

Does this mark a shift in Mr Watts’ position? Who can deny that it must!

The Salisbury Elim Centre where Dr Beeke fellowshipped holds many doctrines in common with those who are rightly condemned for their betrayal of the truth of God by Mr Watts in his article. By having Dr Beeke, Mr Watts and his church have associated themselves in fellowship with the very movements which hereto­fore they condemned.

What Mr Watts has to say in the first section of his article, entitled: “The Ecumenical Movement”, on men changing their positions toward the errors promoted by ecumenism is worth reading carefully. It highlights in the recent past what men such as Joel Beeke are repeating in our day and which Mr Watts is apparently in grave danger of endorsing!

Near the conclusion of Mr Watts’ article, “The Crumbling of Evangelicalism”, he writes these words.
We concur wholeheartedly with these sentiments but we believe also that they are incompatible with an as­sociating with Dr Joel Beeke who, despite numerous warnings and admonitions, has persisted in companying with and the promotion of those whose theology and behaviour are unscriptural.

Mr Watts, it must be said, must be honoured for the sterling work that he has done for the cause of Christ through his ministerial labours and writings and also his work in The Trinitarian Bible Society. We do not hesitate to say this. It is therefore all the more distressful to see his stand threatened by his links with Joel Beeke and his compromising ministry.

Sadly, he is but one of many, who despite brotherly warnings seem to have decided to “turn a deaf ear to God’s Word” and refused to heed the evidence produced to support the warnings of Joel Beeke’s wrong.

No good can come of this. We are heading for a repeat of the folly wrought by many in the wake of Billy Graham’s errant ways.

Mr Watts is but one of many who has been brought into company he otherwise would have nothing to do with as a result of his fellowship with Dr Joel Beeke.

No matter how our words may be construed, the Lord knows the desires of our heart.