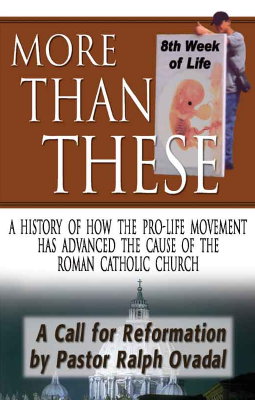 Click here to read More Than These online for free.

A Story Which Needed Telling
An ecumenical epidemic has broken out in America. These days, many evangelical Christians accept Roman Catholics as “brothers and sisters in Christ” and the Roman Catholic Church as a Christian church, albeit with some unbiblical “doctrinal distinctives.” Pastor Ralph Ovadal believes that the pro-life movement has been one of the key factors, if not the key factor, in desensitizing Christians to the danger and sin of accepting the Roman Catholic Church as Christian. In More Than These, Pastor Ovadal begins with the Second Vatican Council of 1962-1965 and documents how the Roman Catholic Church has systematically used the pro-life movement, with the help of Christians, to advance its ecumenical strategy. In the writing of this book, Pastor Ovadal drew from his own extensive experiences working in virtually every area of the pro-life movement, beginning in the late 1970s and including the rescue movement. His years spent as a Christian radio and television program producer and host on a nationwide network provide an added perspective shared by few people. More Than These is also based on research from a wide range of sources, some of which are unavailable to all but a relatively small group of pro-life activists.

This book details how Roman Catholic influence and even doctrine has permeated the pro-life movement, including street-level activist ministries, Christian radio, the pregnancy center networks, and the hearts of major Christian ministries. It documents the damage that such influence has had on the cause of Christ, including actual stories of Protestants converted to the Roman Catholic Church due to Christians being involved in pro-life ministry with Catholics. More Than These is an exposé and a history book, but it is so much more than that. It is a personal story, a testimony, a documentary, a Bible study, and a clarion call for reformation. The lessons learned from this book should be applied not only to pro-life ministry but also to any and every Christian ministry work.

Author's Note
"Prove all things; hold fast that which is good." 1 Thessalonians 5:21

It is an understatement to say that More Than These was difficult to write. I spent much time agonizing in prayer before and during its production. Right up until the end of the project, I prayed about whether or not I should actually publish this book; but I could not escape the conviction that it is the Lord's will that I do so. I fervently prayed about what should be included in More Than These and what should be left out. The reader may trust me when I say that there is much more which I could have shared. I wanted to make sure that I did not document actions, words, and decisions by named individuals which were simply based on spiritual immaturity or ignorance. I did not want to use any quote or action by any named person which was an exception to his normal modus operandi rather than both a past and present rule. I certainly did not want to embarrass individuals, now or in the future, for a lapse of judgment here or there. We can all look back on mistakes in our Christian walk which now make us wince. Tragically, in this confused, apostate age, few of us were blessed to be under solid, sanctified Bible teachers from the time we were saved. Thus we sometimes have learned things the hard way. At the same time, no historical account can be viewed with much credibility or accomplish much good if it is written in the abstract and so smacks of hearsay. Therefore, I determined to name individuals when it was proper to do so, was necessary for the credibility of this book, and was crucial for the cause of Christ.

For many reasons, I have literally lost much sleep over this book. In addition to the deep determination to treat people honorably and compassionately with regard to the issue just discussed, I had concern that some Christians who were too young to have been involved in some of the events of the past related herein will pompously assume that, given the exact same situation, they would not have made the mistakes which some of their elder brethren made. That is more than an assumption; in many cases, it is a presumption. There may be other Christians who did not get involved in those same events because they were simply apathetic and self-centered. This book is not written as an excuse for the do-nothing, armchair critic to gloat.

Lastly, there may be old pro-life friends who read this book and decide that I am some sort of traitor for sharing my story, my heart, and my convictions. I would urge those individuals not to judge this book from an experiential or emotional standpoint but rather to prove it by the Word of God. Quite frankly, old, dear friendships forged in adversity are the very reason that I almost did not publish this book; but old friendships must not stand before the cause of Christ and His gospel.

More Than These will cause controversy, no doubt. But this book came about as a result of controversy, and I trust the conviction of the Holy Spirit. I have been challenged by some who disagree with my position on pro-life ecumenism to systematically present my position on paper. I have spoken out and preached in-depth many times on ecumenism in general; but it is true that, up until now, I have written no treatise specifically on pro-life ecumenism. After having several individuals repeat the claim that I had not put my position in writing because I could not defend it, I decided to write a book on the issue. I do pray that the Lord will use this book mightily for His cause and His Church. I believe that what is shared in these pages is applicable far beyond the pro-life issue.

This book is dedicated to those Christians who truly sacrificed much to rescue the unborn between 1987 and 1993. If few of your brethren appreciate your selfless courage, surely your deeds still testify of it. I have literally seen your valiant faces marred with dust and sweat and, in some cases, blood. I am a witness that you did what is rare for American Christians in this modern age. For a high and noble cause, you risked property, liberty, limb, and in some instances, even life. Though that cause was fatally compromised and your leaders let you down, God knew your hearts; and I trust that your posterity will remember your courage.

﻿﻿﻿Click here to read More Than These freely online!﻿﻿﻿