I am providing here a link to an article which was posted at Deseret News October 21, 2013. It is a report of Dr. Albert Mohler’s relationship with LDS officials and his recent speaking engagement at the Mormon Brigham Young University. I believe in civil and religious liberty. I believe Christians should stand against the persecution of anyone. But Al Mohler is playing right into the hands of the devil when he cultivates friendships with LDS officials, speaks of respect for them, and gives speeches at BYU when the word of God forbids it, for instance: James 4:4; 2 Cor. 6:14-17; Eph. 5:11. The Mormons are thrilled to have this very influential evangelical desensitize other evangelicals to the utter wickedness of Mormonism, regardless of any statements he makes about differences in doctrine. Mohler’s actions empty his mild clarification of credibility and effect. So, the LDS officials, and the devil, give such statements from their good friend a wink and a nod, knowing the greater good which is being accomplished for Mormonism and the corruption of evangelicals. I mean, the LDS newspaper Deseret even includes his quotes in its story! Say, Al, I would just mention here that the Scriptures nowhere tell ministers to have fellowship with and cultivate working friendships with the leaders of false religions masquerading as Christian. No, quite the opposite is true.

By the way, the organization Standing Together exists for the purpose of breaking down walls between the LDS and Christianity. So, thanks, Al. Thanks for this. Thanks also for signing the Manhattan Declaration. Thanks for muddying the waters concerning the sin of homosexuality . . . and so forth. I suppose a big thank-you is also due to Dr. John MacArthur who is once again having his dear friend Al Mohler, along with other New Calvinists such as Mark Dever, speak at the 2014 Shepherds’ Conference. Oh, the wretched irony but growing commonplace nature of it! Unfaithful shepherds preaching at “The Shepherds’ Conference”!

http://www.deseretnews.com/article/865588850/At-BYU-Baptist-says-Mormons-and-evangelicals-may-go-to-jail-together.html?pg=all
At BYU, Baptist says Mormons and evangelicals 'may go to jail together'
10 years later, Ravi Zacharias to speak at Mormon Tabernacle again 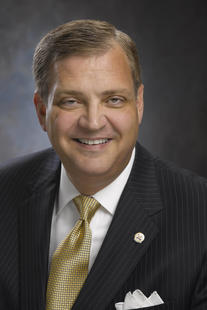 R. Albert Mohler Jr. (AlbertMohler.com)
PROVO, Utah — LDS Church apostles and leaders of other faiths increasingly are cultivating relationships with one another, a process recently accelerated by shared concerns over religious liberty.

Mentioning what he termed his "friendship" with LDS officials, a Baptist leader on Monday gave what once might have been considered a unique speech at BYU, saying that while Mormons and evangelicals are divided theologically, they share "common concerns and urgencies" about "unprecedented and ominous" attacks on religious freedom.

"I do not believe that we are going to heaven together, but I do believe we may go to jail together," said R. Albert Mohler during a speech to nearly 400 students and faculty in an almost-full Varsity Theater in the Wilkinson Student Center.

He later added, "… only those with the deepest beliefs and even the deepest differences can help each other against the encroaching threat to religious liberty, marriage and the family." 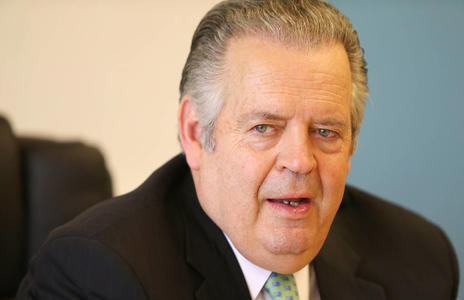 Richard Land, president of Southern Evangelical Seminary and past president of The Ethics & Religious Liberty Commission, meets with the Deseret News editorial board in Salt Lake City Thursday, Sept. 5, 2013. Land is the Southern Baptist Convention's official assigned to address social, moral and ethical concerns, with particular attention to their impact on American families and their faith. (Jeffrey D. Allred, Deseret News)
The president of the Southern Baptist Theological Seminary in Louisville, Ky., said after his speech that "I wasn't exaggerating, I was speaking honestly when I said we may go to jail together. I don't necessarily mean going to prison together, but I think we're going to suffer the coercive power of the secular state together."

He said religious people already have seen rights eroded by legislatures and court rulings about contraception, traditional marriage and family.

Mohler said Mormons and evangelicals "share love for the family, love for marriage, love for the gift of children, love of liberty and love of human society. We do so out of love and respect for each other and out of the gift of a growing and genuine friendship."

"It has been my great privilege to know friendship and share conversation with leaders of the LDS Church, such as Elder Tom Perry, Elder Quentin Cook and Elder Todd Christofferson," he added. 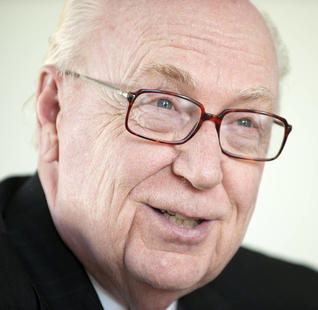 George O. Wood speaks with the Deseret News on Sept. 17, 2013, about his role as superintendent of the Assemblies of God and the organization's role. (Matt Gade, Deseret News)
While Mohler's noteworthy speech once might have been considered rare, today it fits within a larger framework of interfaith outreach.

In 2004, evangelical leader Ravi Zacharias, introduced by Richard Mouw of the Fuller Theological Seminary, spoke at the Mormon Tabernacle in Salt Lake City, the first time in 105 years that an internationally renowned evangelical leader stood at that pulpit.

In 2010, Cardinal Francis George spoke to 12,000 people at a BYU campus forum about the need for both Catholics and Mormons to stand together to protect the ability of individuals and groups to practice their religion in the public square.

Last month, BYU separately hosted prominent Christian leaders Richard Land, president of the Southern Evangelical Seminary, and George Wood, general superintendent of the Assemblies of God. Both met with LDS Church officials and each spoke as part of the "Faith, Family and Society" lecture series that Mohler joined Monday. Land told the Deseret News: "When it comes to religious freedom, we all hang together or we all hang separately. We are common targets in this." Wood's lecture was attended by another member of the LDS Church's Quorum of the Twelve, Elder Jeffrey R. Holland.

"I believe it's the year of the evangelical at BYU," said Greg Johnson, president of Standing Together, a ministry that seeks unity among Utah's evangelical churches and facilitates evangelical/LDS dialogues. "These three are nationally known, highly regarded opinion makers. What excites us is these lectures arose from institutional invitations. This was done by The Church of Jesus Christ of Latter-day Saints at the highest levels. As a former Latter-day Saint who had a brother-in-law graduate from BYU, I say these are very much new days and good days."

In January, the Deseret News has confirmed, Zacharias will return to Temple Square to speak from the Tabernacle pulpit again. He also will appear at BYU as part of the same lecture series as Land, Wood and Mohler.

Mohler will return to BYU on Feb. 25 to deliver a nationally televised, campuswide forum address.

Interfaith efforts like these aren't without critics. Land and Wood have faced some objections over their visits last month, as Zacharias and Mouw did in 2004. Wood issued a response to complaints that his BYU visit validated Mormonism.

"These guys are going to take hits," Johnson said, "but they are gaining help for this cause."

Mohler clearly stated his doctrinal differences with Mormons, perhaps as an effort to blunt criticism for a man Time.com called "the reigning intellectual of the evangelical movement in the U.S."

"This is what brings me to Brigham Young University today. I'm not here because I believe we're going to heaven together. I do not believe that. I believe that salvation comes only to those who believe and trust only in Christ and in his substitutionary atonement for salvation. I believe in justification by faith alone and Christ alone. I love and respect you as friends and as friends we would speak only what we believe to be true, especially on matters of eternal significance. We inhabit separate and irreconcilable theological worlds, made clear with the doctrine of the Trinity, and yet I am here, and gladly so. We will speak to one another of what we most sincerely believe to be true, precisely because we love and respect one another.

"I do not believe that we are going to heaven together, but I do believe we may go to jail together. I do not mean to exaggerate, though we're living in the shadow of a great moral revolution that we commonly believe will have great and devastating human consequences. Your faith has held high the importance of marriage and family. Your theology requires such an affirmation and it is lovingly lived out by millions of Mormon families. We stand together for the natural family, for natural marriage, for the integrity of sexuality within marriage alone, and for the hope of human flourishing.

The text of Mohler's lecture, "A Clear and Present Danger: Religious Liberty, Marriage and Family in the Late Modern Age," is available on his website, www.albertmohler.com.

"I was impressed with his ability to talk with our university community in such a focused way (without) being distracted by obvious theological differences that exist between our separate faith traditions," BYU church history professor Richard Neitzel Holzapfel said. "Our students and faculty benefited from his review of current and future challenges to religious freedoms in the United States taken for granted only a generation ago."

Russ Robinson, pastor of Provo's First Baptist Church, said he was excited by Mohler's message. "I think we'd better be able to work together for common ground if we honestly and openly talked about our differences, too. That honesty and respect would help us to engage more on issues we have in common, like marriage and family."