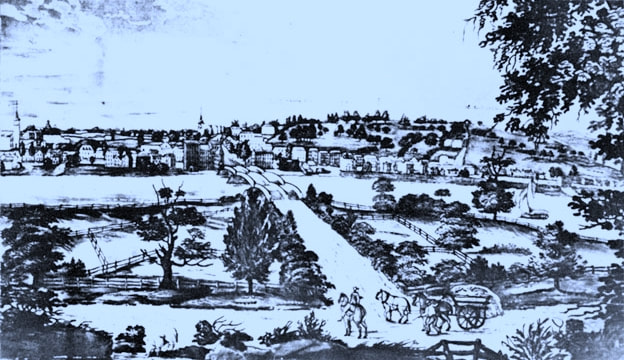 A view of Haverhill from Bradford Academy
It is said that Mr. Allen [Rev. Jonathan Allen] had the soberest view of the duties belonging to the Christian ministry, but his life was not so solemn as his sermons. He was fond of fashion and festivity. He wore the short breeches and silver knee buckles and a cocked hat and powdered wig. He entered into the life of the people, the frolic and jest, and every social pastime.

The social influences were strongly against religion. Bradford was very gay and festive. The young and old joined in frequent festivity. John Hasseltine built his house and finished it with a dance hall. The second story of that house, in the rear part, which is still standing, was devoted to amusement and dancing. It was not an uncommon thing for Parson Allen to call for his deacon to go and spend the evening at the dance hall.

“A revival of religion was a thing never heard of.” But in the midst of this frivolity the spirit of God came to the heart of the minister and people with great power. There were faithful men, and women especially, who were praying for God’s special blessing. The prayer was answered.

The preaching was changed in its spirit; the young people at the dance-hall were thoughtful in the midst of their frivolity. Among them one was a peculiar favorite—beautiful, thoughtless, rollick-some, and always ready and foremost in frolic and amusement. She used to chase the youthful Rufus Anderson “about the Academy grounds with a stick.” She could always bribe the bell ringer at the Academy with a smile. This was Nancy Hasseltine. She grew thoughtful while the dance went on. She left the gay throng, went out into the garden, walked under the fruit trees, while the thought came like a voice from heaven into her heart, “she that liveth in pleasure is dead while she liveth.” She sought for the advice of “Aunt Hall” who had counselled the gay girl till she had become discouraged. The special visit, which was for the sake of gaining religious counsel, was almost over before the seeking girl unburdened her heart and found the affectionate Christian counsel she sought.

Nancy (Ann) Hasseltine became the wife of Rev. Adoniram Judson. She died short of 37 years of age in Burma.
John Hasseltine and his wife were worldly people. They did not believe in “experimental piety.” John Hasseltine passed by a window of his house, looked in and saw his daughter on her knees; she was in tears, filled with emotion which found expression in prayer. . . . He said in his heart, “if my child, so sweet and innocent and fair must needs weep when she comes to God in prayer, what will become of me?” He walked out on his farm; the vision of that girl kneeling and in tears kept before him. He threw himself down under an oak tree and poured out his soul in an agony of prayer.

The answer was immediate. His belief, his feeling, his spiritual perceptions were all changed as by a sudden inspiration. The peace of God in his heart was so precious and so full that he rose from his knees shouting with strange joy, “glory to God!”

The good work went on in the church. The young people in the Academy were interested. The Principal, Rev. Abraham Burnham, was himself quickened in his religious character and became an active helper. “God gave divine energy to his word.”

More than thirty inquirers sought the Lord, among them Mary Wheelwright, Harriet Atwood, Fanny Woodbury, John Hasseltine and his wife, and four daughters, Rebecca, Mary, Nancy and Abigail C, Moses Hall and wife, and Betsey Trask, and many others whose lives have been a blessing in the church and in the world.

The results of that work of grace were wonderful. The renewed church, the transformed Pastor, the new Academy baptized with the Holy Ghost, social life lifted to the higher plane of fellowship with truth and with duty and with God. We think of the house, transformed from a dance-house, where the minister and his deacon were a little time ago engaged in frivolity, now a place of prayer, that house ever after associated with nurture in piety and education and benevolence . . . we think of the maiden life prepared by that revival to confront the great question of personal surrender, for the love of Christ, in a life of missionary toil. We think of the question decided and the determined action, in face of the argument of many friends, and even the protest from very many Christians against the rashness of the undertaking.

Harriet Atwood became the wife of Rev. Samuel Newell. She died at 19 years of age on the Isle of France (Mauritius).
We think of that heroic spirit of Ann Judson and Harriet Newell who crossed the sea and gave the world that rare example of self-sacrifice. The voyage on the brig Caravan, the first sight of the Hindoo cottages, the hostility of the East India Company, the early death and lonely burial of that youthful missionary on the Isle of France.

Two years at Rangoon, “remote,” “unfriended,” “reft of every stay but heaven,” “the little grave in the garden,” the troubled home at Ava, the red cloud of war, the death prison, the extortions, privations, the journey to Oung-pen-la, the daily expectation of death, the long years of engrossing agony and the recorded feeling of assurance in it all, “my prayers will be answered”—the work in intervals between the agonies for the women and girls, the few converts, the sudden death alone with her Burman women and the last cry of anguish in the Burman tongue, and the lonely grave under the Hopia tree, where pilgrims linger and weep.

We have been tracing the ways of God, following one of the avenues along which the revival of 1806 has sent its power . . .

On the 5th of February, 1812, Parson Allen preached a sermon at Haverhill on the occasion of the embarkation of the missionaries Ann Judson and Harriet Newell. The text was from John 11: 52—That also he should gather together in one the children of God, that were scattered abroad. In the sermon the preacher showed what God has done, what he is doing and what he has got to do to gather his scattered people. He tenderly addressed the missionaries as “my dear children,” and gave his parting farewell and benediction. The service was closed with singing by the great congregation of the hymn written by the preacher for this occasion:

Go, ye heralds of salvation;
Go, and preach in heathen lands;
Publish loud to every nation,
What the Lord of life commands.
Go, ye sisters, their companions,
Soothe their cares, and wipe their tears,
Angels shall in bright battalions
Guide your steps and guard your fears.

Go, ye pilgrims, heirs of glory,
Show to Pagans CHRIST your King;
While the gospel is your story,
Earth shall with hosannas ring.
Go, and let your whole behaviour,
Show your love to CHRIST your LORD,
Let the heathen know their SAVIOUR,
Teach them to obey his word. . . .

March 24, 1837. This day died Dea. John Hasseltine, aged 80 years. . . . He was possessed of much physical energy, and sustained a good character as a man of integrity and uprightness, but knew nothing of religion experimentally until the revival of 1806, when himself, wife and several children were hopefully made subjects of renewing grace, and united with this church. In June, 1807, he was chosen deacon, which office he held till his death, and the active duties of it to perform with credit to himself . . . Dea. H. took a deep interest in the prosperity of the church in this place and of Zion generally . . . [H]e died with a hope full of immortality.

O ye angels hovering round us,
Waiting spirits speed your way,
Hasten to the court of heaven,
Tidings bear without delay.
Rebel sinners
Glad the message will obey.

Written by Rev. Jonathan Allen in the revival of 1806